My Rhapsody
was built on the 6th of March 1975. At least, this is the date stamp on the quality inspection sticker inside that was signed by two names. The Rhapsody String synthesizer was built from 1975 till 1980 by the italian company ELKA. It was one of the more widely spread (read sold by thousands) string machines then. The list of users includes EM acts like Jarre, Tangerine Dream (Christopher Franke used it till the early eighties in all concerts since 1975! Peter Baumann used it in 1976-1977), Klaus Schulze (only a tour or two in the mid seventies). And also Supertramp and other pop bands used it too. 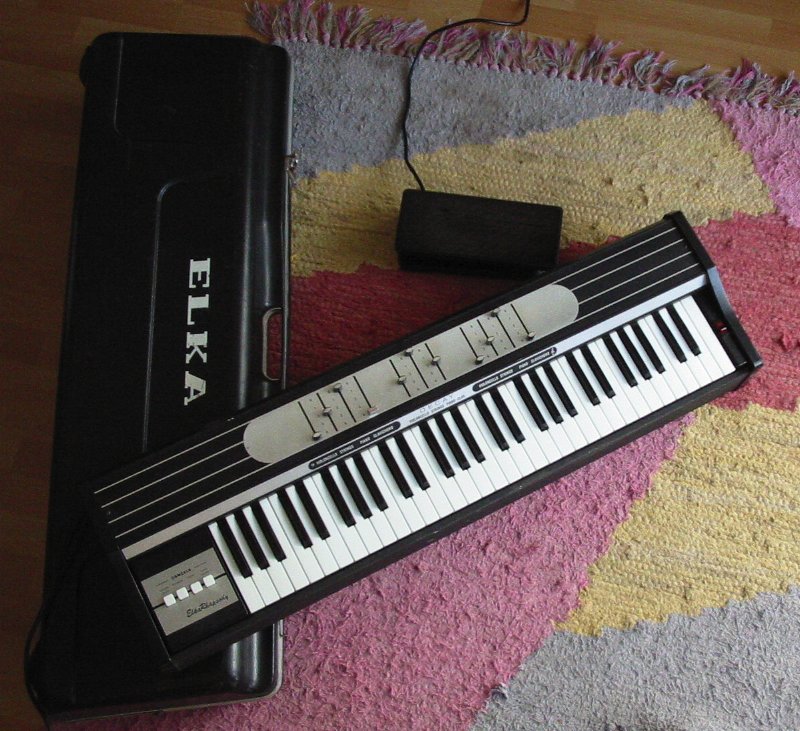 You don't see the label "GENERAL OUT" on instruments that often. But maybe on a general's office door when he is off for lunch :-)


Inside this thing is working mainly like an organ: using a master top octave oscillator and divider analog chips to do the needed pitch for each key. No summing of square-waves at different octaves used to generate the waveforms. Each key got its own little voice board with the needed waveshaping and envelopes. The sound is also filtered different over the key-zone. Therefor the voice boards are named A to Z and used 3 to 5 times over the keyboard span. Using A-boards for the lowest 5 keys and 3 Z-boards for the top three keys. In between is the whole alphabet used.
If you got a Rhapsody with a bad non working note on the Clavinet sound only, just swap the board of this voice (they are located just right under the key that is triggering it) with one of a key you don't use that often in about the same keyboard range (due to the different filter setting by the used capacitors.
The sounds are then beefed up all together in a double chorus running at a high speed at a not that wet setting for "life" and "ensemble" and another on at a slow speed for adding a "slow beating". Better never ever deadjust them from the factory setting, because this is were the special ensemble sound comes from. This effect will make a long release (the 3 sliders in the middle pulled to the keys) sounding not boring as an organ, which the ELKA Rhapsody is technically more or less anyway. 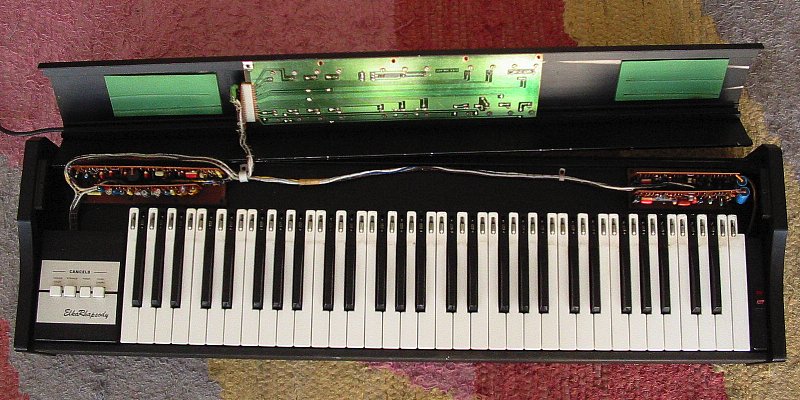 Very typical for those seventies string machines: to open the instrument you need only undo four screws:
two on the top of the instruments to see the back of the slider section, the double chorus (two board on the right), the chorus' LFO (left, front board) and the static filters for the sounds.
This ELKA is different build from the ones "born" a year later till the end of the production run. One thing differend are the board seen here. And also some parts are differend. For example, the bucked brigade transistor array of the chorus (doing the delay) is a round thing with six legs and might be appear as being a transistor on first glance. But it is a ITT ICA350. Most other Rhapsodies use the chip like looking ITT ICA350Y with 8 pins (but only uses 6 used!). 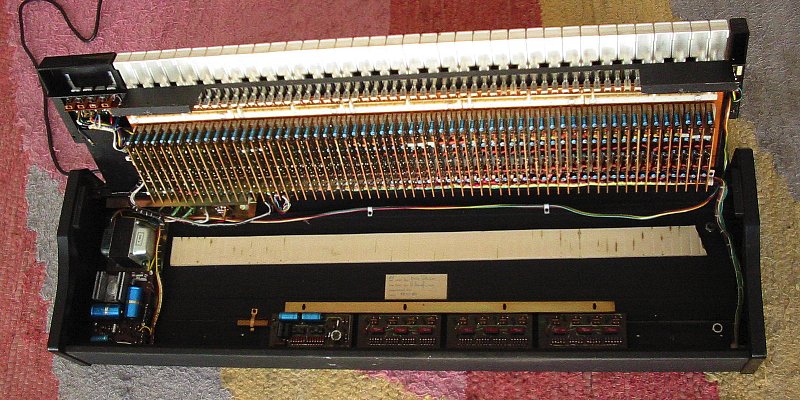 And just like on my Crumar Performer, the Logan String Melody and the Farfisa Synthorchestra, you can undo two screws under the instrument to flap the keyboard upward to see what is hidden under the keys.
Here you see the 61 voiceboards that do the envelopes and the dynamic filtering of each key. And because the sound of the Clavinet or Piano needs to be different depending on the note pitch, these board differ a bit (3 capacitors and 3 resistors). There are 20 different boards used. Labled A-Z with some letters missing (I, J, K, Q, V & X). Only the lower 4 keys share the same type of voice board ("A"). All other keys use each type three times. The highest key is using the type "Z". 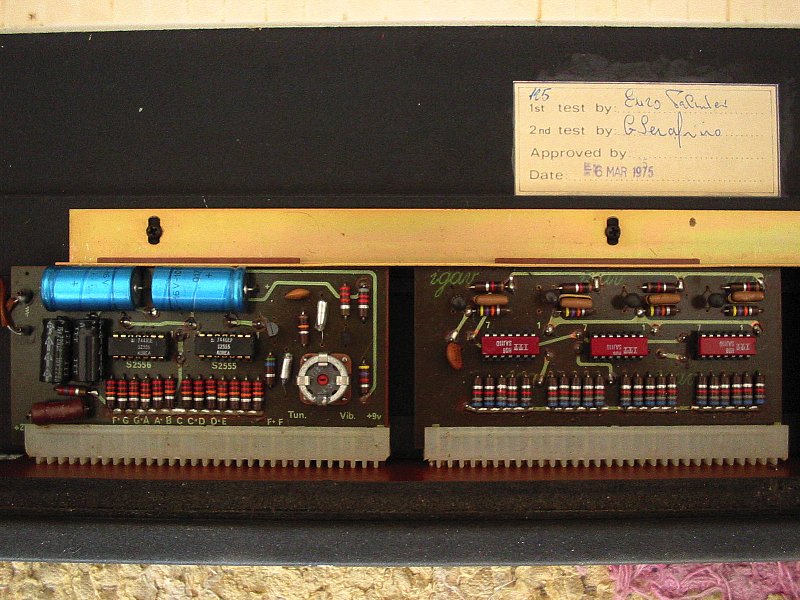 Inside a 1975 version
(from the schematics date 10.3.1976 they changed the this, see here for details for these)
The top octave is generated by S2555 and S2556 chip combination. Both chips are feed with the same 2 MHz descrete build master oscillator on the same board.
The first chip (S2555) generates 7 notes of the top octave by dividing the ingoing 2 MHz signal by:

But the note F#/Gb is noticeable flat by nearly 6 musical cent. You can hear this with a trained ear or you will notice it when playing together with other instruments.

Inside a 1976 and later revision
The newer revisions are built using the schematics dated from the 10th of March 1976:
These use then very common SN74221 as top-oscillator running at 667,527 kHz. And then a single AY-1-0212 divide the ingoing squarewave into the 12 notes of a top octave.
The divider factors for each note are:


Now again for both revisions:
And the three identically divider boards do the step down octaves needed to fill the whole range of the keyboard and the octaves for the different sounds (Violoncello is one octave below the Strings). Each board covers 4 notes. It uses the ITT SAY110 chip (the red ones on the pictures). These chips are an array of flip-flops triggered by the incomming positive going squarewave of a top octave note. And the flip-flops are chained together to provide several outgoing sqaurewaves at different octaves.